As addressed in a previous chapter, Zimbabwe since Western contact has been a site of much conflict, aggression, and corruption.  From 1896 to 1897 there was an uprising against the British colonial rule referred to as the first Chimurenga, a Shona word for liberation or revolutionary struggle.  The first Chimurenga ended with the assassination of one of the uprising’s leaders and was followed by a period of colonial rule until 1965.  In that year, the colonial period ended with the white minority declaring their independence from the United Kingdom and establishing the independent sovereign state of Rhodesia.  The second Chimurenga was initiated soon thereafter by black nationalists aiming to overthrow the apartheid white government through guerrilla warfare.  The black nationalists succeeded, and the Republic of Zimbabwe was formed in 1980.

During the period of the second Chimurenga, a new style of music, also called Chimurenga, was established by Thomas Mapfumo. Similar to other styles in areas impacted by colonialism, Chimurenga music is a mixture of traditional elements and Western popular styles. The music protested the apartheid rule, though the nature of its commentary shifted after the establishment of the Republic of Zimbabwe. 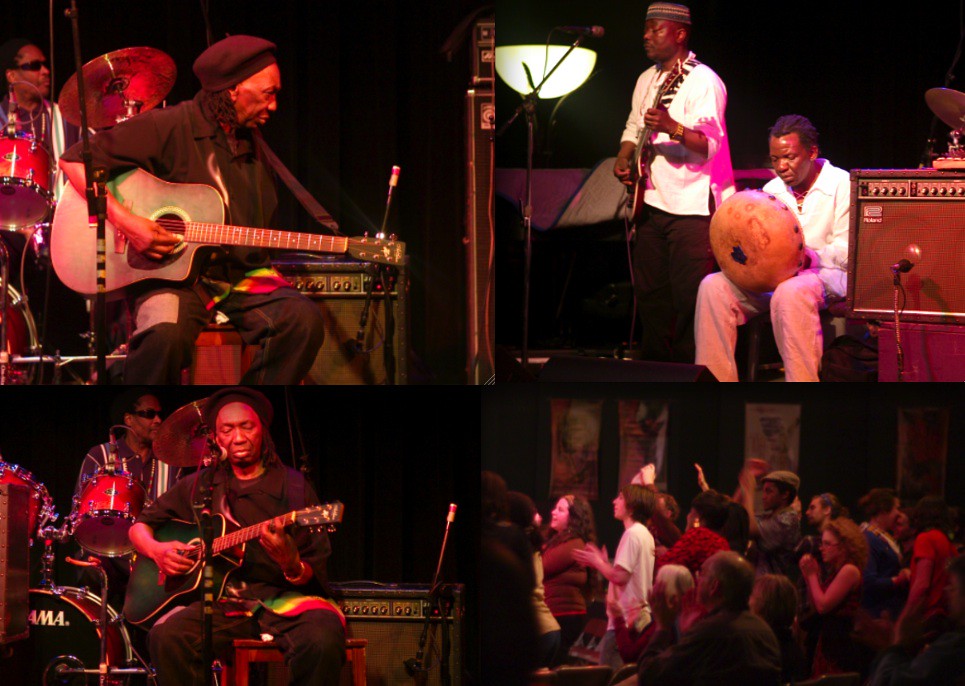 “Thomas Mapfumo at the Cedar collage” by Ernesto de Quesada is licensed under CC BY-NC-ND 2.0

Born in 1945, Mapfumo, also referred to as the “Lion of Zimbabwe,” began his music career as a teenager in bands playing covers of American rock and roll and R&B. During the 1970s Mapfumo began incorporating more elements of traditional Shona music into his own while searching for an original sound. In the early 1970s he played a style of Afro-rock music with the Halelujah Chicken Run Band that mixed Shona music with Western popular styles using standard rock band instrumentation. Working with his guitarist, Mapfumo adapted the playing style and sound of the Shona’s signature instrument, the mbira, to the electric guitar. The guitarist plays with the palm dampening the plucked strings to create a similar timbre to the mbira, which can be heard in the song “Pfumuvhu Parizevha.” Mapfumo would later include the mbira itself in his music starting in the mid-1980s (without the buzzy timbre provided by the bottlecaps). The nature of Mapfumo’s lyrics, now in the Shona language instead of English and including more vocables and yodeling, took on a more political and revolutionary tone. Mapfumo’s music also displayed influences from other foreign styles, such reggae, jazz, and South African mbaqanga.

Mapfumo formed a new group, the Acid Band, in 1976 and as his music grew in popularity it drew the ire of the government.  Mapfumo’s music was banned on the state-controlled radio stations and he was imprisoned in 1977.  After his release, Mapfumo formed his signature band, the Blacks Unlimited, in 1978 and continued composing his chimurenga songs. His music is credited with promoting and supporting the nationalist movement, particularly with songs like “Tumira Vana Kuhondo” (“Mothers Send Your Children to War”). After independence Mapfumo contributed to the burgeoning worldbeat and world music scene, eventually turning his attention to critiquing the Mugabe-led government in Zimbabwe.

Robert Mugabe was one of the leaders of the black nationalist movement during the second Chimurenga and was first Prime Minister of Zimbabwe from 1980 – 1987 and then President from 1987 – 2017. A coup in 2017 ultimately led to his resignation. While Mapfumo’s music was supportive of the effort Mugabe helped lead during the second Chimurenga, after independence Mugabe and his government became a new target as their corruption became apparent. With increasing tensions continuing to grow, Mapfumo left Zimbabwe for the United States in 2000, not to return to his home country for a performance until 2018, after the ouster of Mugabe.  Mapfumo’s song “Disaster” is a pointed critique of the Mugabe regime, released shortly before he left for the US.