A music and dance style originating in the Punjab region of northwest India, Bhangra has influenced, and been combined with, contemporary forms in the Punjabi Indian diaspora. As a traditional/folk style, it is typically performed as part of harvest celebrations and was eventually used during other occasions, such as weddings and festivals. The lively and joyous nature of such events is reflected in both the music and the dance.

Spiritually, the Indian state of Punjab differs from the rest of India where Hinduism (around 80% of the population) and Islam (approximately 15%) are dominant, as the dominant religion is instead Sikhism. The Sikh religion is one of the world’s youngest major religions, having been established in the 15th century, and is practiced by approximately 25 million people worldwide.  Sikhs follow the teachings of ten Gurus, which is compiled in their sacred scripture Guru Granth Sahib. Sikh music draws from many of the principles of Indian music, such as raga and tala, and uses some of the instrumentation from the Hindustani tradition. Specific ragas are associated with hymns from the Guru Granth Sahib and Kirtan, a devotional style also found with other religions such as Hinduism, is typically performed at temples and in a call-and-response format that encourages participation.

Several traditional instruments are used in both the folk and contemporary popular forms, operating as distinct sonic markers that tie the style to the region even when mixed with Western popular influences. The instruments also differentiate bhangra from those used in Hindustani music, the art music tradition of northern India. 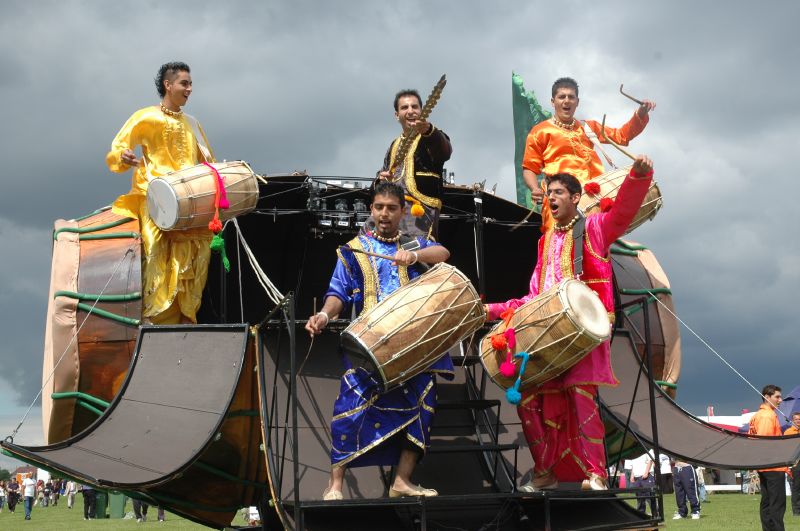 “Dhol players” by John Pannell is licensed under CC BY 2.0

The chimta, another rhythm instrument used in Bhangra, is a metal tong with attached jingles.  Also used in Punjabi folk styles and Sikh devotional music, in Bhangra is it particularly used to emphasize the downbeat. 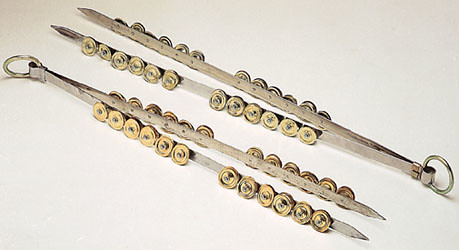 The tumbi is a small single-string plucked fiddle that creates a distinctive high-pitched sound.  The instrument was featured in 2001 song “Get Ur Freak On” by Missy Elliot, as well as in the example below by Panjabi MC.  The algoza is a double end-blown flute where one flute provides the melody and the other a drone. 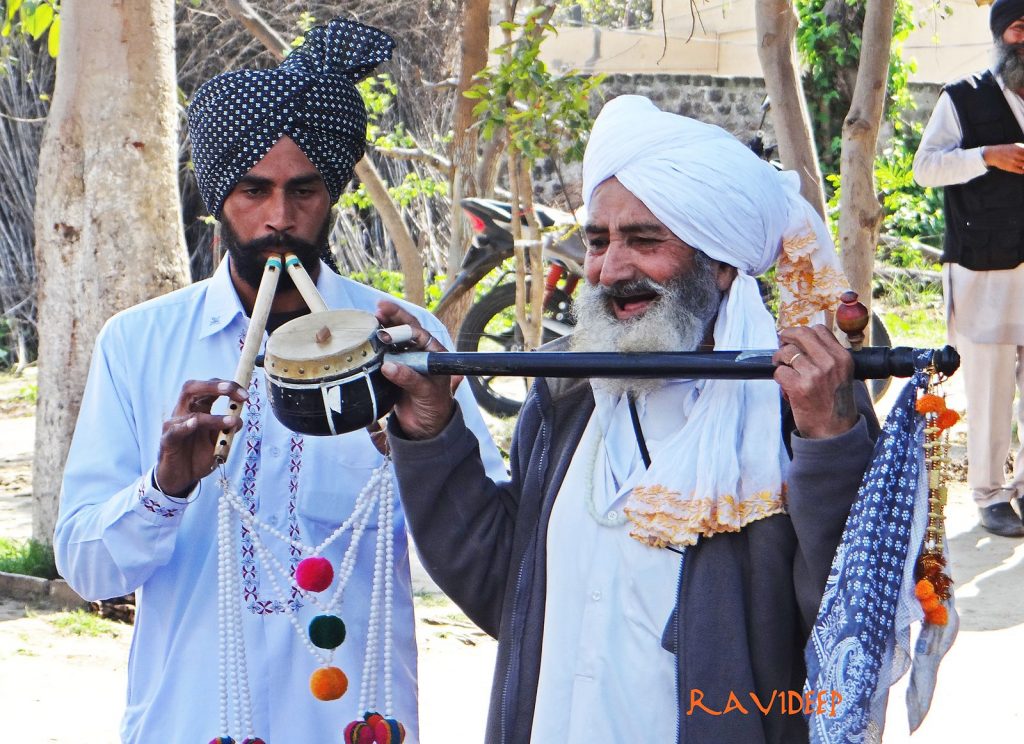 Algoza on left and tumbi on right

Bhangra  dance is quite vigorous with constant motion performed by dancers in brightly colored clothing, called vardiyaan, that reflect the celebratory contexts of the performances. The attire is loose fitting to allow for movement of the dancers. A common element in Bhangra is a wide stance, often with one leg elevated to waist height. Depending on the move being executed, dancers will switch between their legs after a fixed number of beats. Hands are frequently held high with the palms out and the thumb and index finger joined.

A new version of Bhangra emerged not in India but in the Punjabi diaspora, particularly the United Kingdom. Throughout the twentieth century Punjabi have immigrated to new lands, particularly after the partition of colonial British Raj into the independent states of India and Pakistan in 1947.  The Punjab region was divided amongst the two nations, the division largely along religious lines with Moslems in Pakistan and Sikhs and Hindus in India.  Displacement occurred on both sides of the newly formed border and in the subsequent decades more Punjabi Indians immigrated to the United Kingdom and other former members of the British Commonwealth. It is in this diaspora of Punjabi Indians removed from their homeland where a new version of Bhangra was formed.

A new style emerged during the mid-1980s that mixed elements of the folk tradition with contemporary popular styles and techniques, especially from hip hop, reggae, and electronic dance music. The new popular music version maintains many of the characteristic sonic markers of the folk tradition, particularly traditional instruments like the dhol and its signature rhythms. The popular style could either be in the more traditional Punjabi language or in English, the primary language of the new lands where this new version of bhangra formed. Similar to the folk version, the popular version is largely used for festive occasions, particularly weddings and festivals, and the vigor of the original accompanying dance has been preserved. The hybrid nature of the popular style of bhangra reflects the hybrid identity of the new generation of Punjabi Sikhs, who in many cases have been raised entirely outside of India.

While the title references British soccer player David Beckham’s ability to bend the ball around defenders, the film actually focuses on the 18-year old British Punjabi Sikh Jesminder ‘Jess’ Bharma and her conflict between the traditional expectations of her parents and the broader cultural practices of London.  Over the course of the film, Jess develops an aptitude for soccer and joins a local team against her parent’s wishes.  The film culminates with Jess’s sister’s wedding and the finals of a soccer tournament occurring on the same day, with Jess torn between her two worlds.  The film’s soundtrack reflects the nature of the film’s characters, as more traditional-sounding Indian music is employed in scenes featuring the Indian elders, bhangra for scenes featuring Indian youths, and Western popular music for locales outside the Punjabi immigrant community.

Panjabi MC, birth name Rajinder Singh Rai, is one of the most prominent artists within the genre of Bhangra, with “Mundian To Bach Ke” being his most well-known and successful songs to date. Born in England, his music fuses traditional elements of Punjabi music with contemporary styles, such as hip hop, R&B, and electronic dance music. This mixture of styles is demonstrated in “Mundian To Bach Ke” with traditional Punjabi elements including instruments like the dhol and tumbi, traditional bhangra beat patterns, and the Punjabi language combined with Western-derived samples and a rap-like vocal approach. The hip hop influences in the song were further accentuated in a 2002 remix of the song that featured additional vocals by American rapper Jay-Z.