Turkey, much like other countries in Western Asia and Eastern Europe, has had a tremendously complicated history. Numerous cultures have moved in and out of the region for centuries due to war, invasion, and governmental realignments. Turkey, as a result, has a cultural and linguistically diverse population. With ethnic Turks, Kurds, Arabs, Albanians, Bosniaks, and many others all living within the national border.

While Turkey is a secular country, its population is overwhelmingly Muslim. Like other Abrahamic religions (such as Judaism and Christianity), Islam is a monothestic religion with the belief in a central god figure. Islam is the second largest religion in the world, after Christianity, with over one billion followers. And like other large, organized religions, Islam a number of sects or denominations..

The two largest sects of Islam are Sunni (roughly 80% of Muslims) and Shia (roughly 15% of Muslims). Within the Sunni sect, a small sub-sect exists known as Sufism. All Sufis belong to certain orders, each with their own traditions and practices. Among these orders is a small but impactful religious order known as the Mevlevi order, predominantly from Turkey. The Mevlevi are adherents of the teachings of a Muslim mystic from the 13th century named Rumi. His teachings and the practices of the Mevlevi order are considered mystical and their beliefs are quite spiritual in nature. 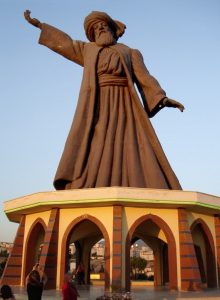 Statue of Rumi in Buca, Turkey

The most noticeably visible practice of the Mevlevi is a ceremony called Sema (or Sama). This ceremony is an example of an Islamic devotional act. Practitioners of the Sema are initiates to the Mevlevi order and are traditional male only. The video below shows a performance of the Sema ceremony, often referred to in the West as the “Whirling Dervishes” — an exoticized name used as a marketing term to attract tourists to performances. “Sema” means “listening” as meant to be a dance of deep meditation to honor God. Everything seen in the video is highly symbolic. From the position of the body to the garb, each will be addressed below.

The dark cloak shields the practitioner from the world, as he removes this cloak, he may begin the dance. The tall brown hat represents a tombstone and marks the intentional death of one’s ego. The stark white skirt represents the shroud of the ego, trying to hide it from God. As the dance begins the practitioner has a closed posture symbolizing the closeness to God. Once the spinning begins, the arms outstretched. One reaching up to God to receive his blessing, the other palm facing the ground the transmit God’s power to the Earth.

As the practitioner reflects on the texts being recited, he prepares for the dance. This performance of text enables a state of meditation. Through the meditative action of dancing, the physical reaction to reach to God and bring blessings to the Earth enables a repetition of this act to bring a heightened state of consciousness in spirituality.