This fundamental material established core vocabulary and concepts that will be used through the course. These six groups below will help students be able to understand how music works, breaking the music down in the sonic elements. Each group—Timbre, Dynamics, Pitch, Melody & Harmony, Time & Form, and Texture.

The word timbre (pronounced: tam-ber) can be highly subjective. Timbre is the way something sounds, e.g., the singer sounds nasal. Synonyms for timbre often include “tone color,” “sound quality,” or “character of sound.” This concept is not meant to be a judgement statement, but a description that helps to identify similarities and differences between sounds and musics.

Imagine trying to describe two instruments of the same type, a guitar and a ‘ukulele, for example. Describing the way these two instruments sound similar and different helps to distinguish them sonically, see Examples 1.1 (guitar) and 1.2 (‘ukulele) below.

Describing two or more unrelated instruments/sounds can be easier. However, if the instruments are playing the same, it can still be difficult to distinguish them, see Example 1.3 below.

The examples below demonstrate different types of timbral descriptions, but there are numerous descriptors to use. Listen to each example and describe what you hear. What sounds similar between Examples 1.1 and 1.2? What sounds are different between the three instruments in Example 1.3?

Other ways to describe timbre are to point out features used by the voices/instruments. The singer in Example 1.4 is using a strong vibrato but the melody in Example 1.3 uses a straight tone. Chinese jingju is known for its nasal qualities (Example 1.5) while the singer in Example 1.4 has a full round sound. There are numerous descriptor words that will be addressed in this class, some may include: rough/smooth, falsetto/chest voice, airy/full, etc.

While this element seems easier than others, the real key is to pinpoint which sounds are louder, and softer, than others in music. This will help describe that sound more clearly. Many students with previous music experience will know standard musical terms, often from Italian, French, and German (e.g., crescendo, pianissimo, forte, etc.). While these words are useful, for the purposes of this class, it is easier to avoid such terms. Describing music as having an increase in volume from a quiet section to a louder section is just as effective.

For this text, “pitch” is used as both a specific term, as defined above, and a grouping of concepts that encompass many ideas related to that specific term. Two common synonyms for “pitch” include tone and note, all may be used throughout the text.

Music is made of many sounds. Pitches are distinguished from other sounds as they have measurable frequencies. Each pitch has a specific wavelength, known as a frequency and measured in hertz. This measurement is, of course, culturally derived and not universally recognized around the world or throughout history.

Many concepts are brought together in the grouped idea of “pitch.”

Like pitch, “melody” is both a specific term, as defined above, and a grouping of related concepts. The melody is the main line of interest, the tune you are left with after hearing a piece of music. Think of pop music and the tunes that get stuck in your head. It is the melody that stays with you, not the background sounds and rhythms.

Melodies can be described with many characteristics from the way the melody line moves to the way other sounds harmonize with or support the melody.

Harmony is always culturally and time based. Like timbre, harmony can be quite subjective. However, two descriptions of harmony are useful in understanding the music introduced in this class.

Within the idea of meter, which is an understanding of the organization of the pulse, there are fixed and free meters. To determine the meter of music, first find the pulse.

Music with a free meter does not have a discernible and repeatable pattern in the pulse; the listener would not be able to find a regular beat, for instance listen to Example 5.1.

Music with a fixed meter has a clearly found and repeatable pattern in the pulse. Most music follows this form of meter. As you listen to Examples 5.2 and 5.3, you will be able to find the pulse easily. Tap your foot as you listen.

There are also complex meters that combine duple and triple organization, but the purposes of this class, these complex meters are rare and will not be discussed in detail.

Most of the music you listen to has layers of different sounds, sometimes that is easier to hear than others. Think about a pop song and how the main voice stands out from the background sounds. In simple terms, you are hearing multiple layers of sound, this is texture in music.

Texture refers to the number of parts and the roles the parts play.  There are four main types of texture: monophonic, homophonic, polyphonic, and heterophonic.

MONOPHONIC TEXTURE includes just a single melody line (Figure 5.1) or a group of instruments/voices performing the same line in octaves (Figure 5/2). Example 5.1 below has a single layer of sound, first performed by a flute, then singing, then the flute again.

includes two or more layers of sound, typically with one line sounding the melody. Again, think about pop music. The lead singer’s voice is the most important line, the backing vocals, instruments, and drum beats are secondary as they accompany the main melody coming from the singer. The second layer can be complex with textures of its own, but it remains a secondary layer to the main voice.

Figure 6.3: Melody in green with harmony, drums, and other sounds in red, blue, and black.

includes multiple lines that use contrary motion with interwoven layers of sound, resulting in two or more simultaneous independent melodies. This texture is commonly found in many choir and band compositions. There are multiple melody lines and when they are put together the multiple sounds complete a bigger picture.

Figure 6.4: No one melody throughout, each instrument group/voice build their individual part to create a more complex sound. 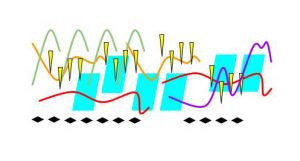 includes at least two performers playing simultaneous variations of the same melody. Each performer/section embellished the melody on their own but play in unison for the majority of the music. The melodic line will move together in time and melodic shape without contrasting motion.

Figure 6.5: Single melody, duplicated by different instruments each with their own embellishment of the melody. Each line follows the basic shape of the melody but has slight variation from the other lines. 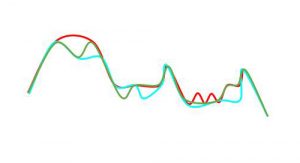 the way a sound sounds to distinguish one sound from another

lack of pitch fluctuation on a sustained note

frequency of a sound; highness or lowness of a sound

the “base note” that the melody is based (synonym: tonic)

the distance between two pitches

a doubling of a frequency but the same pitch set

a sequence of pitches perceived as a unit (synonym: tune)

elaborations on the set melody

sections of the melody and music, often a “breath’s worth” of music

perception of the way musical layers sound together

the pulsation of music, “the beat”

a series of pulsations understood as a unit

the rate of speed of the music

emphasis on a pulse

Main melodic line with harmonic support; accompaniment may be simple or complex

Multiple lines sounded together to create a more complete sound

Simultaneous variation of a single melodic line; “same, but different”