In the Hornbostel-Sachs system, percussion instruments (where an instrument is struck to create sound) are split into membranophones and idiophones.  With a membrane, usually a drumhead, vibrates to create sound.  The membranes are typically made of animal skins or synthetic materials that are stretched over the base of the drum.  Drums can be found in all parts of the world and can be struck in a variety of fashions, including with bare hands, mallets, and sticks.

Djembe – An irregular hourglass shaped drum from Western Africa played with the hands. 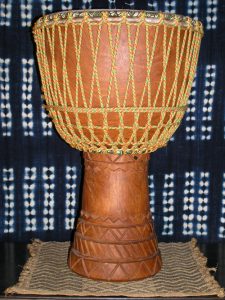 “Traditional Djembe” by Nata Vellinga is licensed under CC BY-SA 3.0 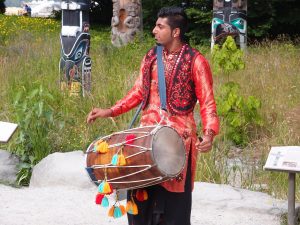 “Dhol Player” by Guilhem Vellut is licensed under CC BY 2.0

are the other classification of percussion instruments in the Hornbostel-Sachs system.  Unlike membranophones, where just a membrane is vibrating to create sound, with idiophones the instrument’s body itself vibrates to create sound.  Think of a set of orchestral cymbals, which vibrate when struck against one another, or even a cymbal as part of a drum set that vibrates once hit with a drum stick.  Idiophones can be classified into subcategories, such as:

are instruments that generate sound through the vibration of a string, whether it is plucked, bowed, or struck.  This classification also includes many keyboard instruments, such as a piano where a hammer strikes a string in the body of the instrument to create sound. 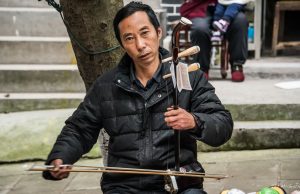 “Erhu Musician” by Ted McGrath is licensed under CC BY-NC-SA 2.0

Autoharp: A zither, an instrument where strings are stretched across a flat body, that is sometimes used in American folk and country music.

include any instrument where sound is primarily generated by vibrating air.  Included in this category are both woodwind and brass instruments, as well as other reed instruments and flutes.

Harmonium – Common in many Indian genres, the harmonium consists of a bellows that is pumped with one hand while the other hand plays a keyboard.  Sound is generated by air sent over reeds. 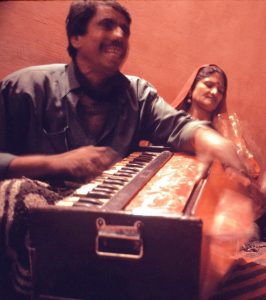 Andean Panpipes (Siku) – Panpipe instruments consist of pipes of different lengths, and pitches, fixed together.  They are played by blowing air across the top of each pipe. The linked example is from the Andes, a mountain range that runs along the western side of South America, where such instruments have been traced by thousands of years. 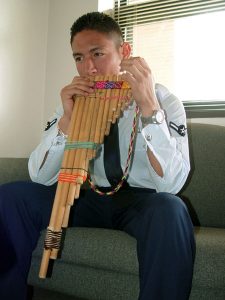 are a category of instruments that was not included in the originally devised Hornbostel-Sachs system.  They are instruments where sound is created through electric means, such as synthesizers, electric organs, and theremins.  Frequently, it is a speaker connected to the instrument that vibrates to create sound.

Theremin – An electronic instrument where there is not physical contact between the performer and the instrument itself.  The performer’s hands instead are placed by two antennas, one dedicated to pitch and the other volume.  The instrument is commonly used for movie scores, especially for older science fiction films. 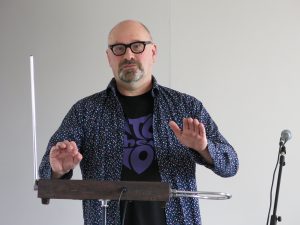 “John Chrisstoffels: The Novel and the Theremin” by Christchurch City Libraries is licensed under CC BY-NC-SA 2.0

Instrument classification where the sound produced comes from an attached membrane

Instrument classification where the sound produced comes from the whole instrument

Instrument classification where the sound produced comes from an electronic device