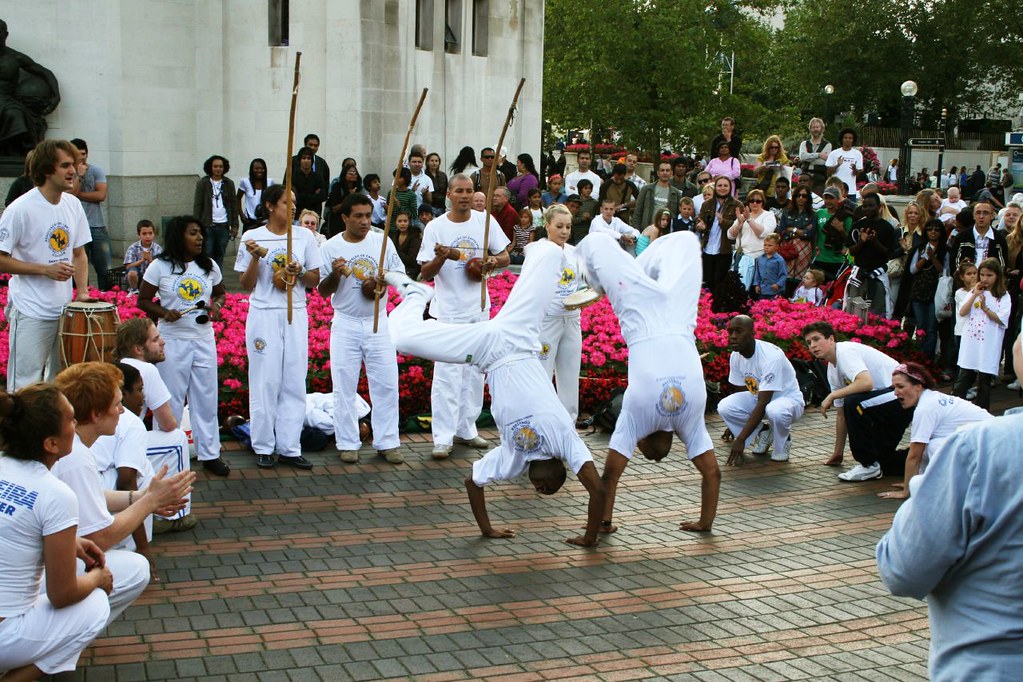 “Capoeira Conviver I” by bongo vongo  is license under CC BY-SA 2.0

is a Brazilian martial art, game, and dance largely derived from African roots.  It was initially developed and practiced by slaves in Brazil. Unlike most of Latin America, which was largely colonized by Spain and, to a lesser extent, France, Brazil was under Portuguese control until 1822. African slaves were first imported during the 16th century, adding to an already enslaved indigenous population. More African slaves were brought into Brazil than any other country, many estimates numbering over four million. Brazil outlawed the slave trade in 1850 but did not emancipate its slaves until 1888, the last Western country to do so.

Capoeira initially emerged as a fighting technique, particularly practiced by escaped slaves and possibly openly practiced on plantations disguised as a dance or game.  Many escaped slaves in Brazil formed autonomous settlements, called quilombos, in remote locales.  After emancipation, there were few opportunities or means of employment for recently freed former slaves. Some capoeiristas were hired by criminal gangs, leading to the formal prohibition of capoeira by the Brazilian government in 1890.

In the early 1900s the style evolved into a less aggressive form of dance and martial art instead of a tool of combat and intimidation. Formal capoeira schools were first formed in the 1930s led by a mestre (master).  With the prohibition of capoeira over, new capoeira schools spread throughout Brazil, many with governmental support. Groups soon started to tour throughout the country and internationally, assisting in the spread of the style and eventual recognition as a sport by the Brazilian government in 1972.

Capoeira potentially influenced the development of breakdancing, which emerged as part of the hip hop movement in New York City in the 1970s.  There were documented capoeira troops in New York City during that period and there are numerous similarities between the two styles.  Both focus on acrobatic movements, largely of the lower body, with the hands, and sometimes head, used for stability. 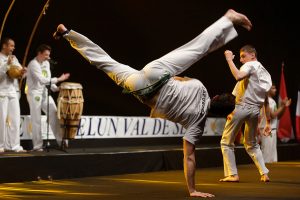 “Capoeira show Master de fleuret” by Marie-Lan Nguyen is licensed under CC BY 2.5 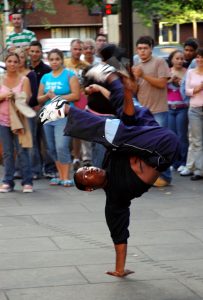 “Breakdancer – Faneuil Hall” by Chris Kirkman is licensed under CC BY 2.0 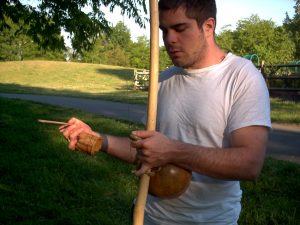 ” Mancha” by Kevin Nesnow is licensed under CC BY-NC-SA 2.0

The pandeiro is a frame drum similar in construction to a tambourine with a head on one side and metal jingles along the rim.  Unlike the berimbau, the pandeiro is derived from a similar instrument found in Spain and Portugal. In addition to the capoeira, the pandeiro is used in other national styles in Brazil, such as samba and choro.

The posture used for the capoeira is defensive with a bent stance that is low to the ground and constant side-to-side movement, called ginga.  The ginga step is the basic movement in capoeira and from which most other steps and movements are derived.  The continual movement and crotch position makes the dancer/fighter more difficult to attack.  Most of the focus is on lower body movements with striking kicks and sweeps.  Some movements can also be quite acrobatic.

Frame drum similar to a tambourine