The Shona people are the majority ethnic group in the land-locked country of Zimbabwe and are also found in small numbers in the surrounding neighboring countries. Before colonial contact the Shona people lived in independent, patrilineal chiefdoms and largely traded in agricultural products. Though, as with the rest of Africa, Zimbabwe, and its people, have been impacted by colonialism. Zimbabwe was previously under British rule as the colony of South Rhodesia, which became Rhodesia in 1965. From 1965 – 1979 the area was under an apartheid government where the minority white population ruled over the largely Shona population. After a period of warfare and struggle by black nationalist forces, the nation of Zimbabwe was formed in 1980 under the leadership of the elected Robert Mugabe.  Mugabe ruled from 1980 to 2017, a period of further unrest in Zimbabwe with governmental corruption, massive inflation, and human rights abuses. 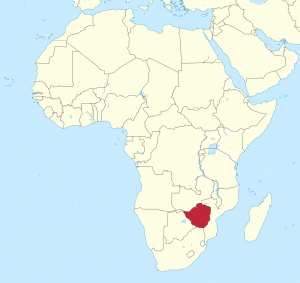 “Zimbabwe in Africa” by TUBS is licensed under CC BY-SA 3.0

Location of Zimbabwe within Africa

While Christianity was introduced during the colonial period and today it is the majority religion in Zimbabwe, most continue some of the practices of the traditional Shona religion. The Shona religion is monotheistic with a high god, though the religion focuses on the relationship with ancestral spirits. The deceased ancestors do not inhabit a separate afterlife, they instead remain as spirits to look over their family members. Thus, the physical and spirit worlds are closely connected, with someone’s successes and failures tied to spiritual forces. For example, if someone is experiencing great misfortune, it could be attributed to a neglected spirit.

One of the most important ceremonies within the traditional Shona religion is the Bira ceremony.  During the ceremony an ancestral spirit is summoned to take possession of a medium and, once doing so, those participating are able to speak with the spirit and solicit advice and guidance.  Music plays a key role in the ceremony, which may go on for several hours throughout the night, as each spirit is perceived to have a favorite song that is used to put the medium into a trance.  Once the medium goes into a trance they put on special clothing and the music stops temporarily to converse before the music resumes so the spirit and attendees can sing and dance. The ensemble for the bira ceremony includes singers, hosho (a gourd shaker), and at least two mbiras, the signature instrument of the Shona people. 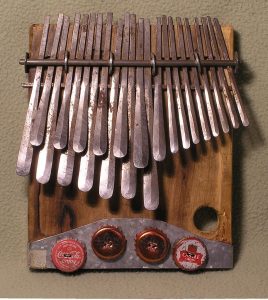 Sometimes referred to as a ‘thumb piano’, the mbira is a lamellophone (a category of plucked idiophones in the Hornbostel-Sachs system) that consists of 22 to 28 metal tongs or keys that are played with both thumbs and the forefinger of the right hand.  Strips of metal with other metallic objects attached, such as bottlecaps, frequently are included on the base of the instrument and provide a buzzy sound that complements the bright sound of the plucked keys. The instrument is frequently placed in a deze, a hollowed half-gourd that may also have shells or bottle caps around its perimeter opening, to amplify its sound. The history of the instrument can be traced back over a thousand years and similar, smaller instruments called kalimbas or karimbas can be found in other parts of Africa.

The mbira is frequently performed together in pairs that interweave and interlock with each other. One mbira, the kushaura, plays the lead part while a second mbira, the kutsinhira, interlocks with the first and emphasizes the bass notes more. Performers can also create three or more interlocking parts on a single mbira. The mbira is closely associated with its ceremonial use but can also be used for social gatherings.

“Nhemamusasa” means ‘temporary shelter’ or ‘to build a shelter’ in the Shona language and is a standard song in the mbira repertoire.  There is a Google Doodle on the mbira that allows you to play one line of the song. Note how it interlocks with the other recorded parts. https://www.youtube.com/watch?v=ZBr5eohenIc