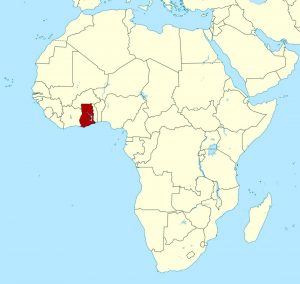 “Ghana in Africa” by TBUS is licensed under CC BY-SA 3.0

Previously under British colonial control, Ghana has been an independent country since 1957 and currently (as of 2020) has a population of just over 31 million people.  As is true of much of the rest of Africa, where borders were drawn as a result of colonialism, there are numerous ethnic groups within the country.  While almost half of the population are of the Akan ethnic group, in total there are over 100 different ethnicities with eleven government-sponsored languages.  As no indigenous language is universally spoken, English is the official language. Over the past century several different popular styles have developed, mixing traditional indigenous styles with European ones.

One of the national musical styles of Ghana, Highlife developed in the late 19th and early 20th centuries and later spread to other countries in West Africa, particularly Nigeria.  Early on the music was associated with the aristocracy and performed at exclusive clubs.  These associations with “high society” resulted in the name “highlife” for the style.  Performed largely with European instruments, the style mixed together many local and foreign influences.  It particularly thrived from the 1930s to the 1960s.

Initially highlife was built upon the instrumentation of European brass bands, but smaller guitar bands later emerged.  Ensembles also frequently included Latin American percussion instruments, such as claves and castanets.  The melodic and rhythmic foundation of highlife was derived from indigenous styles, particularly from the Akan people, though it was also strongly influenced by contemporary styles.  After World War II, the style was particularly influenced by jazz brought by American soldiers.  Highlife is sung in a variety of African languages, though English is also common.  Highlife lyrics address a variety of different themes, including national and political topics.  During the period before and after Ghanaian independence many highlife band’s lyrics included nationalist ideals, such as “Ghana Freedom” by E.T. Mensah.

Developed in the 1990s, hiplife mixes traditional Ghanaian music styles, particularly highlife, with hip hop, a musical form that had been, and continues to be, globalized.  The creation of the style has been credited to Reggie Rockstone and is largely performed in the Akan language of Twi.

Reggie Rockstone – “Keep Your Eyes on the Road”